Information on Fireworks in Palmetto Bay

Fireworks serve as a tradition in the United States. In America, celebration more than fireworks, and South Florida is no exception. For birthdays, graduations, and the more common New Year’s Eve extravaganza, people light off fireworks on a number of occasions.

So how did all this begin? Our team from the Fireworks Lady & Co. want to break down some information on Fireworks in Palmetto Bay, as well as the history of fireworks from around the world. Read on to learn more!

Many credit China with the invention of fireworks as early as the 7th century. The most commonly cited legend refers to a Chinese cook mistakenly inventing fireworks by mixing charcoal, Sulphur, as well as saltpeter. This mixture compressed within a bamboo tube eventually exploded.

However, some others refer to legends referring to the Chinese utilizing a similar chemical mixture, placing bamboo shoots onto a fire to cultivate the bangs and pops we commonly know of today. Their intention? To scare away spirits and other threatening entities.

China receives its fair share of lauds for the cultivation of the very first fireworks. However, Italy should receive credit for making fireworks look all sparkly and beautiful.

Italy is the responsible party for introducing aerial fireworks to the world. This gives them their shape. The country additionally discovered using metallic powder for the beautiful shimmer and colors we see in fireworks in Palmetto Bay today.

Fireworks made their first official appearance in America in 1777 on Independence Day, July 4th. Wasting no time to celebrate the first year of American Independence, wartime American Congress suggested lighting up the night with pyrotechnic celebrations.

Rockets remained relatively crude in the 18th century. However, this did not stop Americans from utilizing these, as well as raised platforms with fizzing fireworks that display patriotic images such as the profile of storied United States hero George Washington.

The average American household spends less than $100 on Fireworks each year. Nevertheless, this totals up to over $700 million in total spent in the land of the free. Consequently, Americans spend almost $7 billion on food for Independence Day alone.

Floridians know this all too well. You can visit any Disney theme park at night, understanding fully why Disney holds this title. They don’t just set off fireworks. Their goal is to take visitors on an immersive storytelling journey experience with fireworks only adding to the magic.

Blue Fireworks are Actually Quite Difficult to Make

With all the colors you may see in a display of fireworks in Palmetto Bay, blue is the most challenging to construct. This process involves balancing a number of different chemical compositions, as well as heat to create a blue effect. 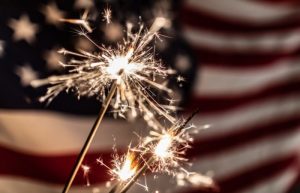 Every year, cultures and nations from all over the world light off New Year’s Eve fireworks. This obviously includes the large spectaculars on major cities like New York City and London, however, consumers can host their very own fireworks shows as well.

Nonetheless, it remains crucially important to seek out firework products and suppliers that place safety and reliability at a paramount. With a company like the Fireworks Lady & Co., we certainly take pride in our fireworks aesthetics, but safety is the most important facet for our company.

We submit all of our products through a rigorous safety analysis and testing before providing it with our label of approval and placing it on our shelves. This ensures that each one of our provisions remains ready-to-use for consumers.

For many Americans, price matters when it comes to their fireworks. For this reason, our team from the Fireworks Lady & Co. offers wholesale and package pricing. We offer the best priced wholesale fireworks in Florida. While this may seem like it primarily applies during the New Year’s Eve and Independence Day seasons, we proudly keep our doors open all year long, available for the next party or celebration.

When you need fireworks in Palmetto Bay, you can rely on the Fireworks Lady & Co. To learn more about our fireworks products and what we can do for your needs, contact our professional pyrotechnics experts today!